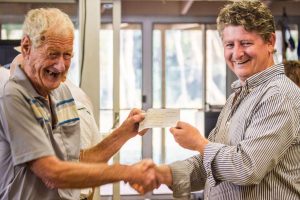 Earlier this week The SMBI Chamber Executive Committee met with the MBCIA Executive Committee to discuss how we will be able to jointly install the CCTV Cameras on the Russell Island Recreational Hall to overlook the main Russell Island Car Park. As a result of this meeting, today Brian Paddison the President of the MBCIA presented an $1805 cheque to Chris McGregor, the SMBI Chamber Acting President. While this $1805 will only cover most of the cost of the additional cameras for the car park, it will not cover the cost of their installation, which will be approximately $1700.

The Chamber would like to see the Russell Island Car Park cameras installed before Christmas. For this to happen, we need the additional $1700.

If you are able to donate to the completion of this project you can do so here.